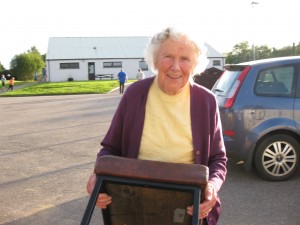 The Trustees of Kirkhill Community Centre are sad to note that our former trustee Wilma Williamson has passed away. Wilma was a stalwart of the centre since it was built in 1987, largely through the efforts of her and her husband Norman.

Wilma always took a keen interest in the running of the centre and would often walk to and from the centre to open it up and back again, sometimes late in the evening, to check it had been left tidy after an event and lock up. Wobetide anyone who had not left it up to her exacting standards of tidiness! She also attended and helped to organise many events in the centre including the annual Craft Fayre.

Wilma sat on the Kirkhill and District Amenities Association committee for many years and continued as a trustee of the current Kirkhill Community Centre SCIO. Her main role was to record bookings and issue invoices to our users and I recall spending evenings in her house taking notes of the bookings when we first started to list them on a booking calendar.

Wilma was a familiar site in the village often seen walking to and from the centre in all weathers until quite recently when her health was failing. She gave a huge amount of time and effort to making the centre run smoothly for the benefit of our community and will be sorely missed.

The funeral service will be held in Wardlaw Church on Friday 11th October at 12 noon with refreshments after the internment at Wardlaw Graveyard in the community centre.